‘So much to do so little time’ was the general call from many of the Conran team this time last week as the London Design Festival 2011 swung fully into action with the opening of many of the larger shows around the capital.

This year Tent and designersblock in the ever-fascinating Farmiloe Building seemed to showcase a more raw, up and coming talent whereas Tramshed and designjunction housed some of the design world’s most interesting and creative brands with a easy going but professional vibe.

A group of us went along to the opening party of designjunction, which debuted in Milan this year, showcasing ‘the best in global design’. Fascinating to see inside the Victoria Building on Southampton Row too. 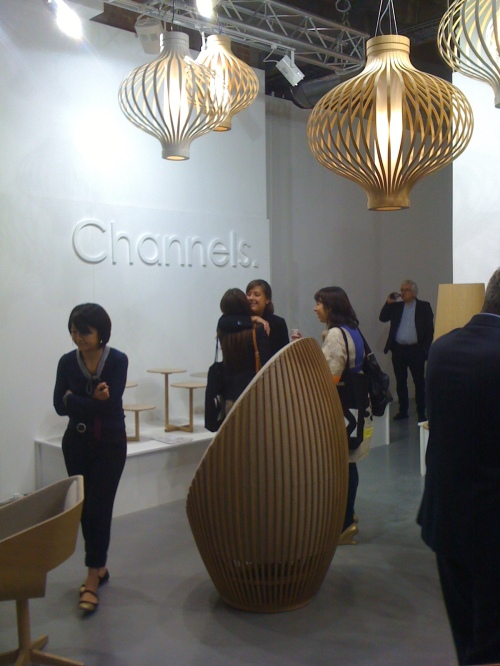 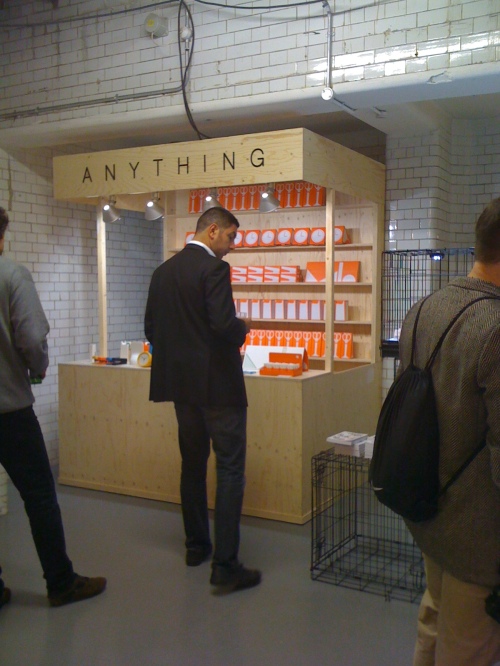 “This chair has always been a favourite of mine and for a long time I toyed with the idea of it being a floor-based item with no legs as when we saw one of the first samples the legs hadn’t arrived with the main body of the chair and we were rather taken with it just sitting on the floor.  However in the end we decided to give people the choice and so this piece is available with removable legs” Terence Conran

This chair offers sink-into comfort with the smart, good-looks of the finest contemporary upholstery. What’s more it’s hand-made in Britain. Who says we don’t make anything anymore?

£999, available from M&S stores throughout the UK and online at www.marksandspencer.com/autumn 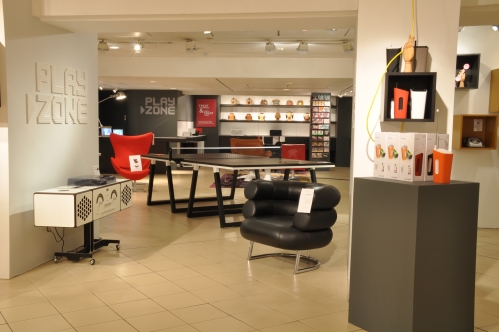 Join us for drinks and check out what’s new tonight from 6-9pm.

Yesterday we talked about our generous and immensely useful Pugin Dining Table. Check it out here if you missed it.

While we are on dining we thought we would talk about our Basevi chair covers – rather a humorous product that allows you to transform a standard dining chair into a design classic.

Just drop one of these slip covers, illustrated with Terence’s drawings of some of his favourite chairs, over a standard dining chair or any tired looking pieces to get yourself a whole new look from a Shaker ladderback to a Thonet.

They are particularly good for dinner parties and for outdoor use and can be easily removed for cleaning.

£299 for a set of two chairs with covers available from M&S stores throughout the UK and online at www.marksandspencer.com/autumn AVAILABLE NOW!

“A good size table should really be the heart of any home – with a multitude of uses from entertaining evening guests or enjoying long, relaxed Sunday lunches, to the ubiquitous use as a homework station for children or for adults to sit around reading the papers.” Terence Conran 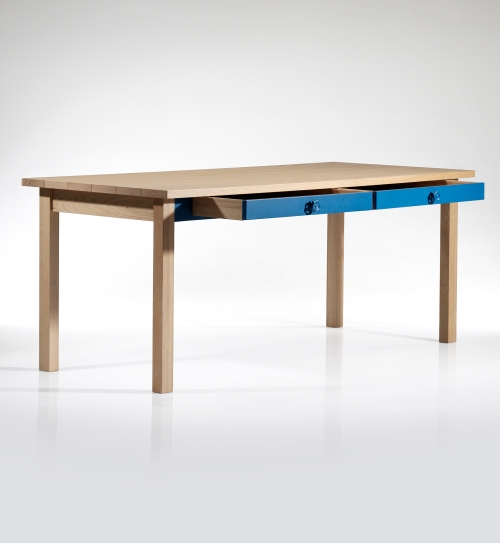 Pugin is really generous in size so you can do all those things. There is even a useful, brightly coloured drawer hidden underneath the surface for hiding away cutlery, napkins or anything else that tends to hang around on the table – a common problem, as many of us know from experience!

£699, available from M&S stores throughout the UK and online at www.marksandspencer.com/autumn

Pugin with some of our other lovely AW11 dining products...

“I particularly love this oversize, generous cushion in tones of teal with a grey ground and ochre highlights. The gradient of colour is beautiful and the quality is superb” Terence Conran

We gave this away as a little press gift at our press day back in June and people loved it. 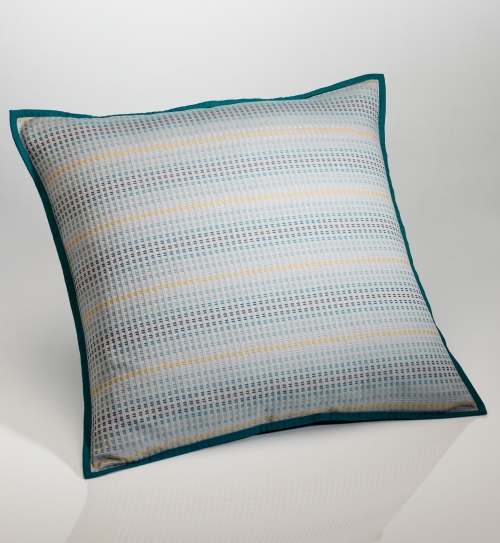 It looks great in a living room environment but equally the soft, sophisticated tones are very restful in the bedroom too and at 58cm square it makes an excellent oversize pillow to aid relaxing reading in bed!

£29.50 with real feather inner, available from M&S stores throughout the UK and online at www.marksandspencer.com/autumn. Available online 23 September.

“We have several clocks in this collection but I have to say I think this is my favourite. I sketched it when we first began talking about this project and its deceptively simple design belies a rather more challenging manufacturing process; layering three types of wood veneer onto a solid oak base, matching the woods together to make up the design whilst maintaining a beautiful, smooth finish.” Terence Conran

We are sure this clock is set to become a classic. Its graphic, contemporary form has the merest nod to the retro styling of the sunburst clocks of the 50s, when Terence first began working, but keeps it simple, clean and contemporary – what Conran does best.

£79 available from M&S stores throughout the UK and online atwww.marksandspencer.com/autumn

This product has caused quite a stir in the office. It’s a witty update on the old-fashioned hourglass – but we’ve reduced the time down to just 15 minutes.

Legend has it, when M&S CEO Marc Bolland saw it he immediately said he wanted to order one for each of his staff at the M&S Head Office in Paddington to make sure meetings were conducted quickly and efficiently!

It’s something we might even think about doing here at Conran HQ. Although an even better use might be for maximum running time for the bath or a countdown to putting the kettle on in the middle of your favourite TV programme….

£19.50, available from M&S stores throughout the UK and online at www.marksandspencer.com/autumn. Available online 23rd September.

Conran: An evening at Tate Modern with Terence…

Ahead of the Design Museum’s forthcoming The Way We Live Now exhibition, which opens in November, the museum have partnered with Tate Modern for an evening celebrating our Chairman, Terence Conran.

Just for a change Terence has the night off and can put his feet up and relax, leaving the hard work to others. Leading figures from the many worlds that Terence has been involved with during his career will take part in an evening of presentations and discussion, looking at the many ways which he has influenced the world we live in and the way we live our lives today.

The evening will be chaired by Design Museum Director Deyan Sudjic and include contributions from Sir Christopher Frayling, Stephen Bayley and Fiona MacCarthy who will each discuss an aspect of Terence’s extraordinary career. 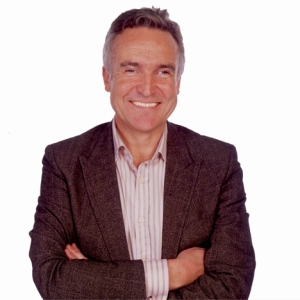 Speaking of the evening, Terence says: “I’m really looking forward to the evening, if a little embarassed as I’m quite shy and don’t take compliments very easily – if that’s not a little presumptuous that the speakers will be saying nice things about me! But I admire all of them immensely and each of them have played hugely positive roles in my life so it will be enjoyable to sit back, relax and reminisce over the happiest moments of my life and career.”

We’re sure they will go easy on you Terence and  you will enjoy a night to remember! Rumours that Michael Aspel will be making an appearance with his big red leather book are entirely unfounded.

The event takes place in the Starr Auditorium at Tate Modern on Tuesday 20 September from 1830-2030. To for more information and to book tickets please click here

The Way We Live Now exhibition, which is a further celebration of Terence’s career, runs at at The Design Museum from 16 November – 04 March 2012 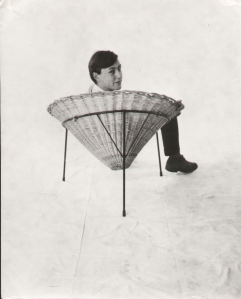 “Our Brindley range of storage is a very simple yet satisfyingly clever design which is available in a number of different sizes for a variety of uses throughout the home”  Terence Conran
A series of open frame wooden boxes with feature leather strapping detail, Brindley manifests itself in many different shapes and sizes so you can find a piece to use as a side table next to the bed or a multi-height coffee table for organising your books and magazines  in the living room.

The tall shelving unit is perfect for displaying books or beautiful objects.

Prices from £199 available from M&S stores throughout the UK and online at www.marksandspencer.com/autumn from September 22nd

What's Going on at Conran? The Conran blog
Blog at WordPress.com.